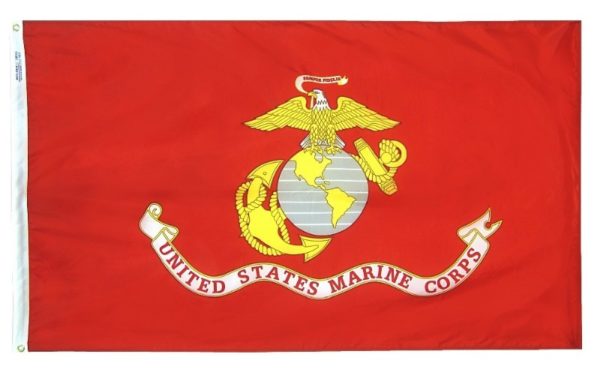 7 in stock (can be backordered)

This U.S. Marine Corps Flag is made of 100% Heavyweight SolarGuard Nylon. Features strong duck heading and two large brass grommets. Durable and fast drying. A variety of colors were carried by the United States Marine Corps troops from the Revolution onward. Their designs varied. The emblem of the Corps, consisting of a globe placed over an anchor and bearing at the top an eagle, has beenin use from at least the First World War onward. The globe features the New World, site of most early Marine Corps military engagements. Red and gold were made the official colors of the Corps in 1925 and the current standard (flag) of the Corps was established in 1939. The scroll held in the beak of the eagle in this flag bears the Latin motto SEMPER FEDELIS (Always Faithful)