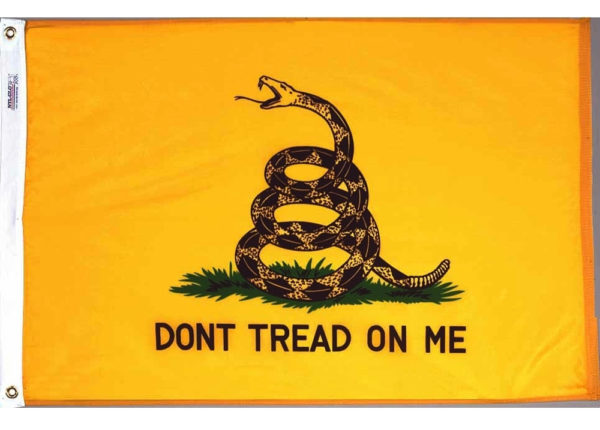 Gadsen Flag. High Quality Nylon. Made by Annin in the U.S.A.

Made from 100% SolarGuard Nylon, America’s No. 1 choice for Flags. Heading is sturdy duck with strong brass grommets. Durable and fast-drying. The rattlesnake Flags were the product of the southern colonies. One of the first of these was the Gadsden Flag, devised by Colonel Christopher Gadsden, a patriot of South Carolina, and presented to Congress with the expressed desire that it be designated as the Flag of the Commander of the American Navy. Congress thanked him for the idea and discussed Benjamin Franklin’s analysis of the Rattlesnake, but declined to incorporate it into law. It is claimed that the Gadsden Flag was flown as the personal banner of commander Esek Hopkins, Commander of the American Navy. It was run up by John Paul Jones. The words, Don’t Tread on Me, were evolved from an incident of the times. Lord North had declared that he would never relax his coercive measures until he had brought America to his feet. The sentence is an answer to his Highness and a warning as well. It said, that should he accomplish his purpose, it would be as dangerous to tread on America as it would be to tread on her symbol.